Join in with The Great Grantham Spring Clean

We are proud to today (Friday) launch The Great Grantham Spring Clean – and we want YOU to get involved.

The anti-litter campaign will recognise the wonderful waste warriors in Grantham and the surrounding villages who have a real sense of pride in their neighbourhoods and spend their free time picking up after selfish litterbugs.

It also aims to get schools, groups and businesses involved – we hope readers will get behind The Great Grantham Spring Clean and by this summer have a renewed sense of pride in our town and villages. See below for details on how you can get involved.

And, of course, by highlighting the issue of rubbish it is hoped that people will take more care and respect their environment.

Over the course of the last year we have featured countless litter-picking heroes. Many of them were youngsters like Ella and Flo Fraser-Betts, of Barrowby, who cleared Denton Reservoir of rubbish at the weekend.

Along with their mum, Esther Fraser-Betts, the girls, aged eight and five respectively, collected two bin bags full of waste, while moving a discarded barbecue out of harm’s way. 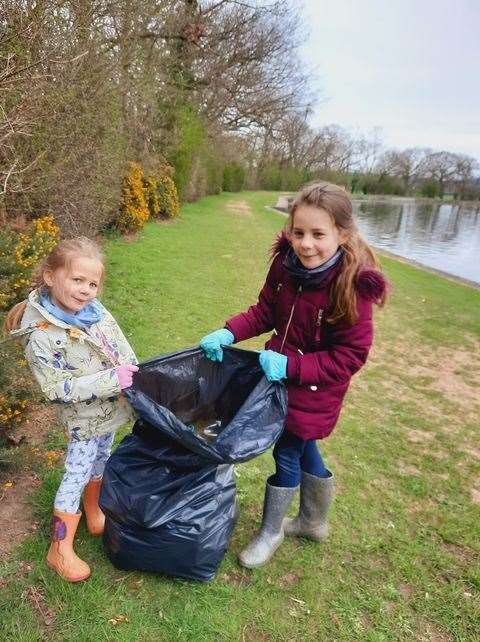 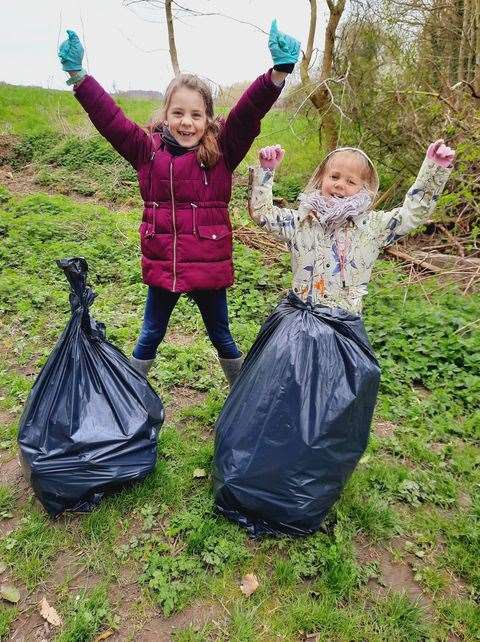 Esther said: “On a visit to Denton Reservoir last week, our girls were saddened by the amount of rubbish they saw and said it really spoils the environment and could harm our local wildlife.

“My oldest daughter, Ella, then pleaded with us to go back the following weekend to do a litter pick. So that’s exactly what we did!”

Both Ella and Flo attend Allington with Sedgebrook Primary School, where litter picks are carried out almost daily.

Esther said that the area around Denton Reservoir was “covered with litter” following a few days of sunny weather.

She continued: “Two bin bags later, many ring pulls, glass bottles, fishing wire and plastic can holders, and we were feeling very proud of what they’d achieved and could now enjoy walking there again.”

Ella is very passionate about protecting the environment. She is making a powerpoint presentation to send into school about all of the things that people can do to help.

Ella said: “I went through loads and loads of bushes [near Denton Reservoir]. I also went picking on the ground and because there was some soil buried over some plastic bags, it was quite hard to grab them out.

“The thing that I was most sad about is that we found a whole barbecue left there.”

Ella’s quest to help the environment was inspired by a programme about two sisters, who started a campaign called ‘Bye Bye Plastic Bags’ to completely abolish one-use plastic bags in Bali, and succeeded in banning plastic bags island-wide.

Ella said: “I just want to help the planet so it is a healthier place.

“I did have this idea of getting all my friends to do it because they’re all interested in wildlife too.

“My teacher at school is really helpful because they do litter-picks nearly every day around the school.”

Esther said: “The young people seen in the press recently are doing such an inspirational act of kindness towards others and the local environment – they all deserve recognition and praise.

“We are proud of you all. Especially our girls.”

Also featured previously was the Barrowby Road Litter Pickers, whose efforts to rid their area of litter are ongoing – in fact, they’re hooked and have now passed the 100th bagful mark. 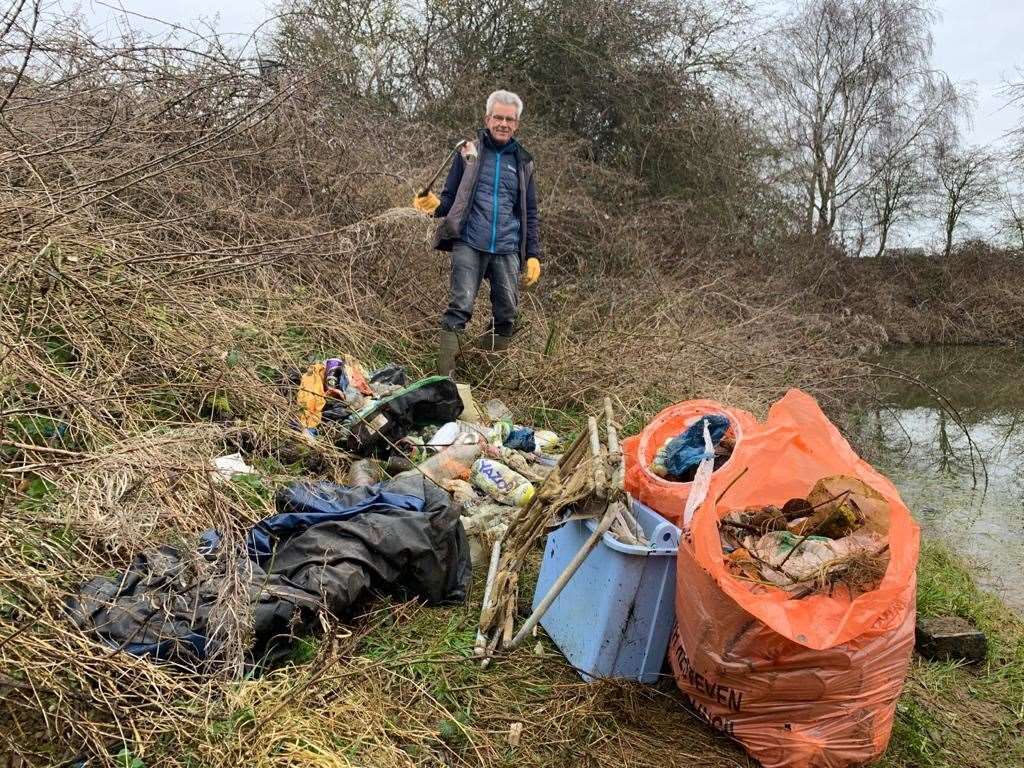 Their clear-up mission began along a cycle path linking Barrowby Road to the Poplar Farm housing estate and led to litter-picking from Gloucester Road to the A1 slip road.

Most recently, the neighbours have concentrated on a small pond at the back of Poplar Farm School. The edges of the small pond were strewn with rubbish, believed to mainly be from people going fishing.

Over two weekends a total of 40 bags were filled. They also removed fold-up picnic chairs, an inflatable boat and an inflatable mattress.

The pond has now been returned to nature and it is hoped visitors will respect it more and appreciate the benefits of this small area in the centre of the estate.

Backing the campaign all the way is well-known Grantham Rotarian Roger Graves, of Barrowby Road, who is also a member of the Barrowby Road Litter-Pickers.

He said: “I hate to see litter spoiling our countryside and town. Doing the litter-picking there is a clear sense of satisfaction and community spirit amongst the group. People appreciate it and if it encourages others to get involved then all the better. It even has the attraction of fresh air and exercise.

“There is absolutely no excuse for littering and, as usual, the minority spoil it for the majority. We can all take our rubbish home with us – the countryside is not a waste bin.

“Education at an early stage is a key point moving forward for the future.

“If you care about the environment and your local community you’ll find others in your road prepared to work with you and a small group of litter-pickers can have a huge impact – your area will look cleaner and there is a huge sense of satisfaction at the end.

“Whilst the initial litter-pick may be big, regular attendance thereafter becomes smaller and easier.

“Don’t be shy have a go, you will be surprised the impact it has.”

Grantham Rotarians have also been busy sprucing up parts of Grantham and the surrounding areas. 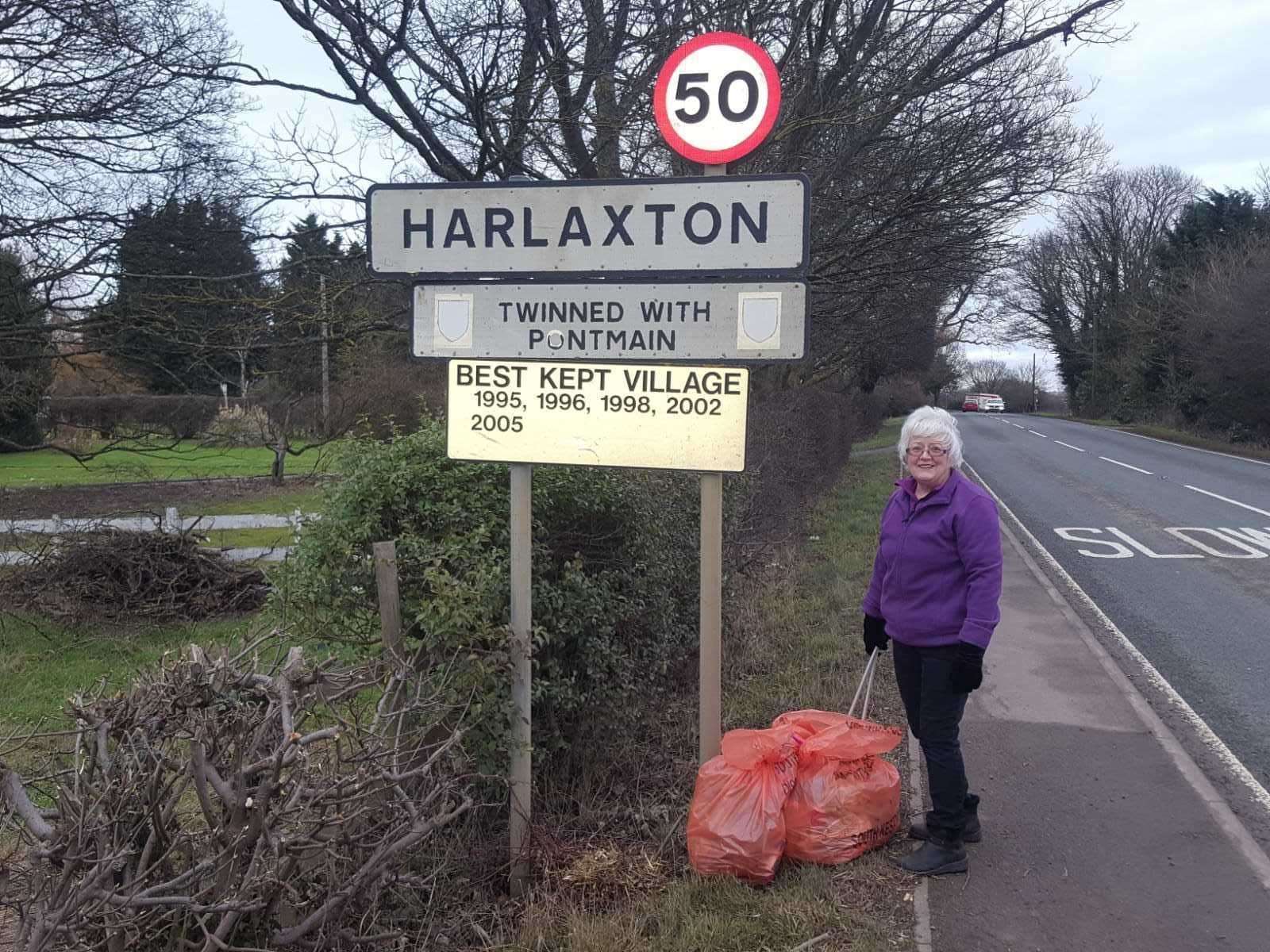 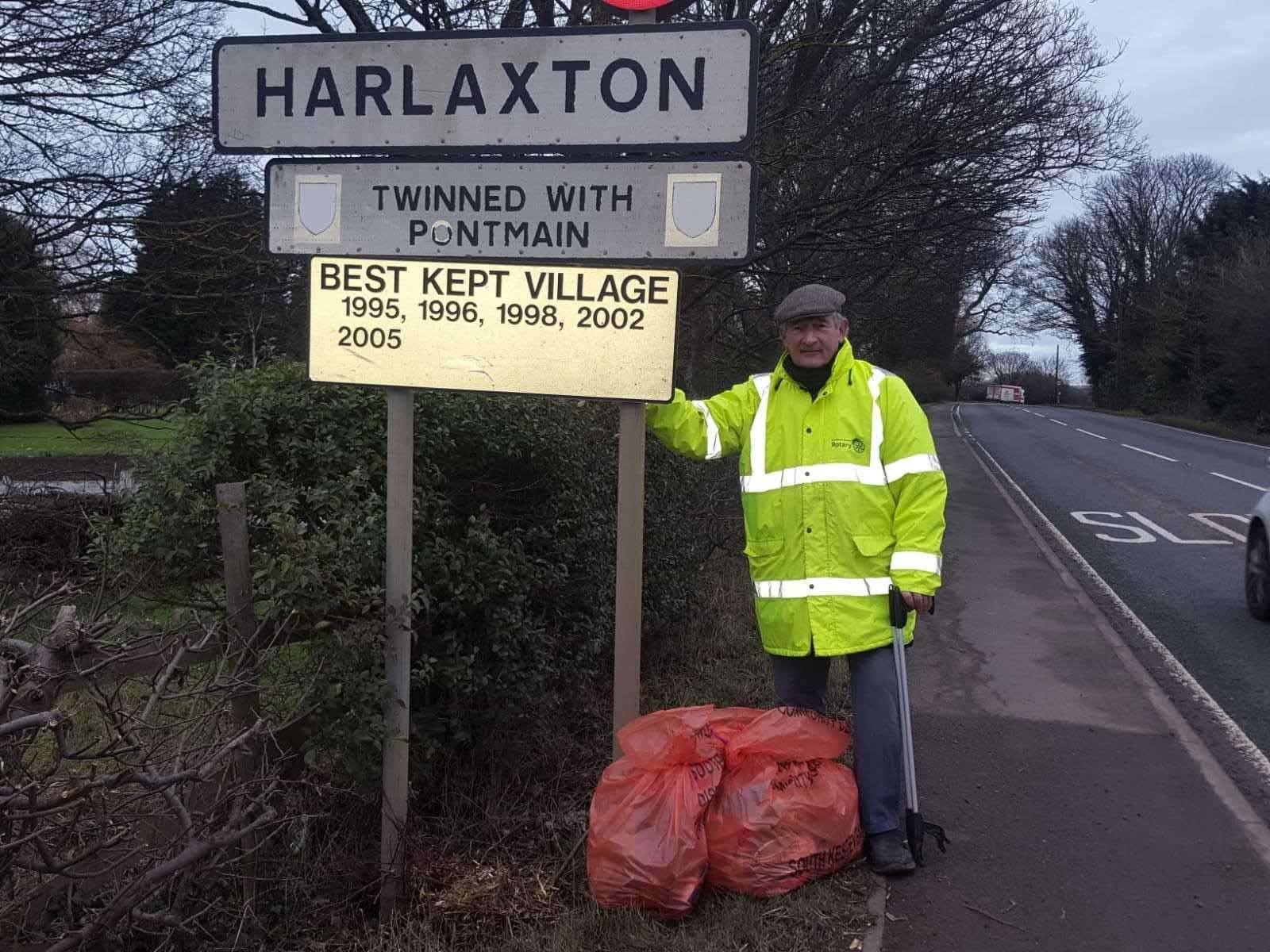 Grantham Sunrise Rotary has recently been involved in clearing the A607 from Harlaxton to Grantham, and also the slip road on to the A1.

Rotary member Irvin Metcalf and his wife, Pam, who is a member of the town’s Inner Wheel Club, have been litter-picking around Harlaxton for the last six years. They have collected 34 bagfuls of rubbish so far this year.

Irvin said: “While driving between Harlaxton and Grantham, Pam and I always used to moan about the litter on the A607 and in our village. We resolved to do something about it rather than moan about it.

“On our first venture down the A607 about six years ago we collected two builders’ 1,000kg sackfuls. Since then, once a week mostly, we clear the A607 between the Harlaxton signs at the west of our village to the A1 bridge outside The Farrier.

“We also walk most days around Harlaxton and mostly take our litter-pickers with us. Litter is mostly fast food outlet packaging, cans, plastic bottles and fag ends and fag packets.”

Meanwhile, the Rotary Club of Grantham has recently formed a group and plans to clear the A1 southbound slip road at Gonerby Moor.

HOW TO GET INVOLVED IN THE GREAT GRANTHAM SPRING CLEAN

It’s really easy to get involved in the campaign to clean up the streets and parks in Grantham and the surrounding areas – and help is at hand.

These must be booked in advance and availability depends on levels of demand.

Items returned to the council will be set aside for 72 hours before being loaned out again.

SKDC will also arrange to collect bags of litter-picked rubbish from a single, pre-arranged location.

Tell us where you cleared, who was in your group and an outline of what you found. Every waste warrior backing The Great Grantham Spring Clean will feature in the Journal. Schools that get involved will receive a certificate to thank pupils for taking part.